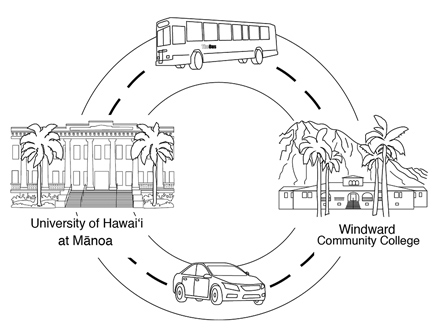 If you have enough credits to transfer to UH Mānoa but still have classes at WCC that fulfill course requirements for your chosen major, you might end up doing the split-campus shuffle.

Mānoa requires students to take six credits to declare it their home campus. But students can also enroll in courses at any of the other nine UH campuses throughout the islands.

Each campus has its own strengths. WCC has a country and family feel while remaining focused on education. Mānoa is enormous—a city unto itself with shuttles running students from one area to the other.

By doing the split-campus shuffle, students can ease into Mānoa, giving them time to adjust to the campus and the commute.

While parking can be a challenge at Mānoa, dual campus student Wyman Barros has taken public transportation from Waimanalo to both WCC and Mānoa.

He had to coordinate his schedule with The Bus to arrive on time for his classes. The Bus has a phone app that students can download to determine bus arrivals in real time.

Fortunately, Barros was able to schedule his classes at WCC for Mondays and Wednesdays and at Mānoa for Tuesdays and Thursdays, a feat that isn’t always possible.

Usually incoming students from other campuses register last when the courses are slim-picking. So going every day to both campuses can be a necessity in a split-campus shuffle.

Barros shares a useful tip in navigating Mānoa: “I found my way around campus by going to Mānoa between semesters and grabbing a map and mapping out where my classes were.”

Doing the split-campus shuffle last semester allowed Barros to register early this semester at Mānoa because he was already a returning student.

He said financially it was harder because he had to notify “the people who gave him his scholarships to have them transferred to Mānoa as his main campus.” He also had to redo his FAFSA grant application.

Denise Riding In, a junior majoring in public health and pre-nursing, is another dual campus student.

She said she spends a lot of time traveling from campus to campus but was able to save a few thousand dollars since tuition at WCC is cheaper than Mānoa.

WCC charges $122 per credit hour while Mānoa charges $431. Students can save money by taking prerequisite undergraduate courses at WCC, which can be transferred to Mānoa.

Riding In said that she couldn’t have made the transition to Mānoa “without the kind care and guidance” of Nicole Iwasaki of the Ka’ie‘ie transfer program. Ka’ie‘ie helped her get into the classes required so she could meet her graduation goal on time.

“The Ka’ie‘ie transfer program gave me the foresight I needed to understand my junior and senior year at Mānoa,” Riding In said.

This helped her make the best of her studies in her last year at WCC.

The Ka’ie‘ie program assists WCC students in making the transition as smooth as possible.

Iwasaki discussed the different programs and prerequisites with Riding In and helped her complete the admissions application for Mānoa.

The program charges a $70 fee for its services. There is an application deadline for each semester: Feb. 1 for fall and Sept. 1 for spring.

For more information about the Ka’ie‘ie program, contact Iwasaki at 235-7464 or niwasaki@hawaii.edu.