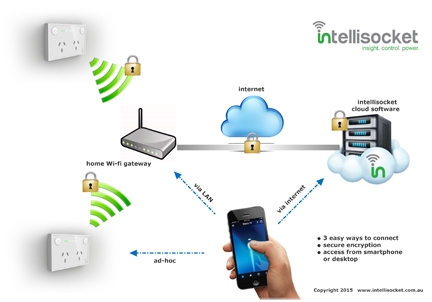 In September 2015, “intellisockets” were installed in energy-consuming socket outlets on the WCC campus.

The initiative, launched by local company Ibis Networks and made possible with financial support from Hawaiian Electric, was part of a three-campus pilot project that saw 471 devices installed at UH Mānoa, 461 at UH Hilo and 300 at WCC.

Intellisockets simply plug into existing electrical outlets. Energy-consuming devices then plug into the intellisockets, which collect information on devices like computers, refrigerators or vending machines that use higher amounts of electricity.

Users from anywhere in the world can log onto a website that shows real-time data for every intellisocket in the network, with options to turn on and off the sockets.

Madori Rumpungworn, a WCC student who works with Professor Dave Krupp on the project, currently monitors the intellisockets from her computer and advises the school on which energy-consuming devices need replacing or discarding.

“I like to think of WCC as being the green model school, with a goal to energy efficiency,” said Rumpungworn.

Besides the intellisockets program, Rumpungworn has experience with software and mechanical engineering and has been involved with other scientific projects on campus like Project Imua, which launched a payload into sub orbit this past summer.

Hawai‘i ranks first in the nation in electric energy costs.

According to the Hawaiian Electric website, homes in Hawai‘i average 30 cents/kWh compared to 11-12 cents/kWh on the mainland.

Hawai‘i’s energy rates are much higher because of the cost to import oil to the islands. Currently, oil is the main source of energy on O‘ahu.

University of Hawai‘i administrators think intellisockets might be the answer to saving both energy and money.

While the project requires an investment of approximately $142,000, about $110,000 of the cost will be funded by Hawaiian Electric and the rest will be covered by the university.

The university expects to save about $40,000 a year with all the new intellisockets purchased and installed.

WCC has already achieved “green status” as a leader of energy efficiency within the university.

The new library was designed to use less energy by having LED lights and waterless urinals. It was built using recycled materials and maximizing natural light from the sun.

A Grand Award in the Hawai‘i Built Green New Commercial– National Green Standard category was given to WCC’s library for being a certified green building.

WCC has already installed solar panels on the roofs of buildings, and all facilities have been updated with energy efficient lighting.

Solar panels, however, work best when it is not rainy or too cloudy and only during the daytime.

“WCC just doesn’t get enough sunlight to benefit from photovoltaic solar panels,” said Rumpungworn. “We are on the windward side. The sunlight isn’t that strong compared to the leeward side, therefore the answer to improving energy efficiency is intellisockets.”