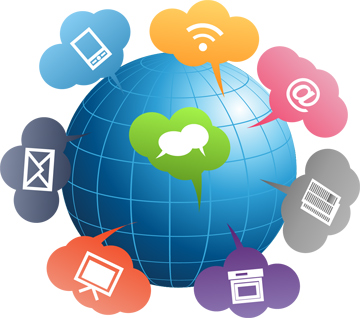 On average, I spend about two hours a day on social media and texting. Some days a little more, others a little less. The positive impacts of this technology include the ability to keep in touch with friends and family that may live far away. FaceTime allows us to visually see friends and loved ones. On the negative side, social media is kind of addicting, leading people to spend way too much time in the internet world and spending less real time with the people who matter most. Teens suffer a lot of negative feedback from social media because it’s easy for peers to blast them and tease them on the internet for everybody to see. Causing some teens to become depressed or even suicidal due to internet bullying. – Amanda Mundon

I have no Facebook, Twitter, Instagram membership, but I do text message. My texting is “as needed only” to deliver my message. Very minimal time is spent doing this. Negatively speaking, I notice the lack of social interaction within my own family, as family members are so preoccupied with “what’s going on” with their Facebook page. They seem to be oblivious to their surroundings, constantly staring and flicking with their phones. While I am still not a Facebook/Instagram, etc. member myself, someone has pointed out to me some benefits of staying in current contact with family or other important people in my life who may live overseas (mainland and such). Although this has mildly tweaked my interest, I am still reluctant on transforming into a “phone-staring unoblivious” member of society. – Alika Turner

I spend about an hour a day on social media. The positives to having social media include many things such as spreading information (news) faster than any other type of media (tv, newspaper, etc.). Some other big positives are finding jobs, relationships, businesses, etc. All of these things actually help the economy as well. A McKinsey Global Institute study shows that social media could add $900 billion to $1.3 trillion to the economy. But with the positives there are always negatives. One of the biggest negatives is lack of physical activity. When we have all this technology around us we start to use it for everything. This leads to less face-to-face interaction. Social media also influences cyberbullying, because of how easy it is to type something harmful to another. Since there are a lot of cons to using social media, you just have to remind yourself you take a risk when you use these sites. – Cole Peterson

I would probably guess that I spend at least eight hours a day on social media, if not more. I think there are many positive impacts of social media. It allows us to be aware of everything that is happening in the world. It also allows us to communicate with others both nearby and far away. Social media helps to know things. It is a useful way to promote things, people and places. For example, on Twitter, it can create drama and miscommunication when some can get offended by others tweets or if you simply just do not like someone and you decide to attack them on the internet. Social media holds the door open for bullying. Even if it is not physical bullying, cyberbullying is just as life threatening. It truly depends on how people use social media because if you use it for good and to better our society then people wouldnʻt give social media such a bad rap. – Kalei Reppuhn

I do not use Facebook, Twitter, Intagram, or any other type of social networking site. Social media makes it easy to interact with different people from all over the world, but people also lose their social skills from relying on social media. While people are able to organize, collaborate and share things online, real world interactions become more difficult as there is no computer screen to sit behind and keep us safe. We are able to spread news and ideas to a massive audience with just one post, but that same person who posted wouldn’t even be able to muster up the courage to tell even one person about what he or she thinks. Also, while good ideas are posted and provoked, so too are bad ideas, such as pranks, harmful trends and even suggestions of rioting. All it takes is one person to post one idea, and it can be spread like wildfire. – Thomas Rose

I spend maybe five minutes a day on social media. The positive impacts of technology on society and social interactions is that it gives us creativity. Sometimes it may give some a sense of belonging because of the likes you get or followers. The negative impact this has on social interactions and society is that people don’t know how to have a conversation without having to be texting on the same time or involving their phone. It’s become a problem for teachers trying to teach or parents who are trying to talk to their child without them paying attention to their phone. It is a gateway to cyberbullying, which has become much more popular over the years of social media evolving. – Hunter Smith