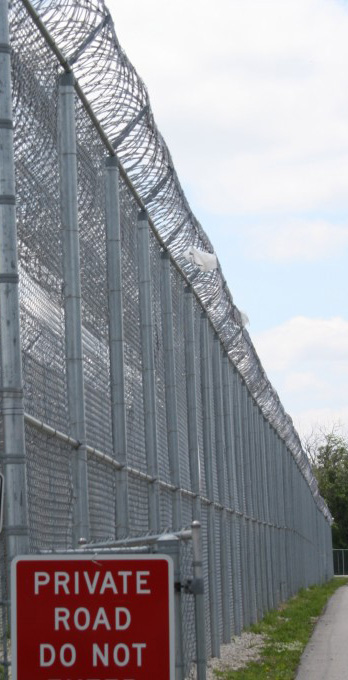 Yes, I do believe that there needs to be a fence or something separating the two properties. I have had personal experience with being a bit frightened by a few of the clientele that were walking through our campus.

One individual was following me and kept asking me for my phone number … (however) most walking through our campus are harmless.

I do believe it would be safer for all parties concerned if there was some kind of decorative partition that would be pleasant to the eye.

I think we should have a fence to keep students safe. They have had people break out before, and some of those people are dangerous. It is also safer for the people at the state hospital.

My grandpa used to work there and told me crazy stories about what patients used to do and how often they wandered out of the hospital.

It wonʻt look pretty with a fence, but itʻll be safer for everyone and give people more peace of mind.

I believe it is extremely important to build a fence separating WCC and Hawai‘i State Hospital.

The two facilities are back to back with nothing to keep the patients from wandering onto the WCC campus, and while most of them do not pose a threat to the students’ safety, there are still a few that do. Building the fence would help ensure the safety of the students.

Furthermore, the patients can also be a distraction from the learning process. On the other hand, we must take into consideration patientʻs rights; not all of them are court-ordered, and building a fence may hinder their freedom.

Fences only divide people. They never bring a common agreement but only draw a line for defense. Being a student for the past two years at Windward, I have never heard of negative experiences besides a few stragglers now and again.

With no account of major incidents, what would be the reason to withdrawal monetary funds from the health care of mentally ill patients or add a tuition cost for WCC students.

As a college student I am able to knowingly use my resources to defend myself. And being on such a highly populated campus, I know there will is usually someone at least within yelling distance.

I don’t believe that the patients in the Hawai’i State Hospital pose any real threat to WCC, so a fence would only serve to ease the undue paranoia that some hold against the mentally ill.

A fence would only make what is and should be a medical treatment facility seem more like the insane asylums that have been done away with for decades.

Putting mentally ill people behind a fence may ease the minds of some but would do some amount of damage to the fragile mental states of some of the patients of the hospital.

This sort of behavior toward the mentally ill has been around for millennia, yet unfortunately has not been put behind us.

This sort of thinking led morally minded people to lock “crazy” people up like animals and beat them with sticks until as late as the beginning of the 20th century.

Men will always fear what they do not understand.

I donʻt think it is entirely necessary to build a fence around both structures. Not only would it be horrendously expensive, it would also be a huge eyesore for both properties.

In the two years Iʻve attended WCC, Iʻve only ever heard of one incident where a patient has escaped. Thankfully it is only a state mental facility, and not a prison.

If the patients are high enough risk, they should be held at a more secure facility.

Yes I do think that building a fence is a good idea for many reasons.

First of all it will keep the patients from escaping from the hospital. It will also prevent them from attempting to harm others in the college or the community.

It can also prevent anyone from just walking onto the state hospital property thus keeping them (the patients) safe as well. In the end itʻs a win-win situation, and it would be more organized.

Iʻm not saying build a fence so no one can escape. Iʻm saying we should build a fence to keep everyone minding their own business.

I don’t think a fence should be built between WCC and the state hospital. The main reason is an economic one.

I think the funds would be much better spent if they were funneled back into our education system, rather than addressing some phantom risk that is a remote possibility at best.

Secondly, I didn’t even realize the state hospital was located near the school, so that shows how little this impacts our daily lives and learning environments as students.

No, I do not think there should be a fence and the hospital. First off, it is a waste of money that could be spent on much better things. Fences are meant to keep people/things in or out.

If they’re trying to keep patients in and students out, if either really wants to, they will find a way in or out.

A fence will not stop someone who is determined to escape or break in. Secondly, the fence will make the campus seem contained and not an open, friendly place.

It will take away from the beauty of the Ko’olau mountains. No one wants to view the mountains through a fence.

I don’t agree that there should be a fence. I assume people want one because they are fearful that “crazy” or “unstable” patients will escape and attack someone. This is plain wrong.

My family moved to Hawai’i in 1998 because my father got hired at the state hospital as a psychologist. He got hands-on experience with most of the patients, and essentially all of them were kind or at least not a danger to others.

People need to stop allowing their fears to influence their decisions. They need to stop conjuring ideas of a delusional, violent and criminally insane patient aimlessly wandering onto campus and killing students.

Though a visible fence may put some people a little more at ease; the real question is whether or not it’s actually necessary.

Many of the individual buildings already have fencing around them, and given how large the whole property is, I’m certain a fence would be a huge expense affecting taxpayers.

Unless there have been incidents of people getting out and harassing students, I don’t think there should be a wall. Walls outside of your windows will harm even the soundest of minds. It can make you feel like an animal and encourage outbursts of panic and rage.

If we are trying to heal these people, a wall around them is one of the most effective things you could do to hinder their progress. If they are causing problems, then maybe the hospital should be moved to a more secluded location.