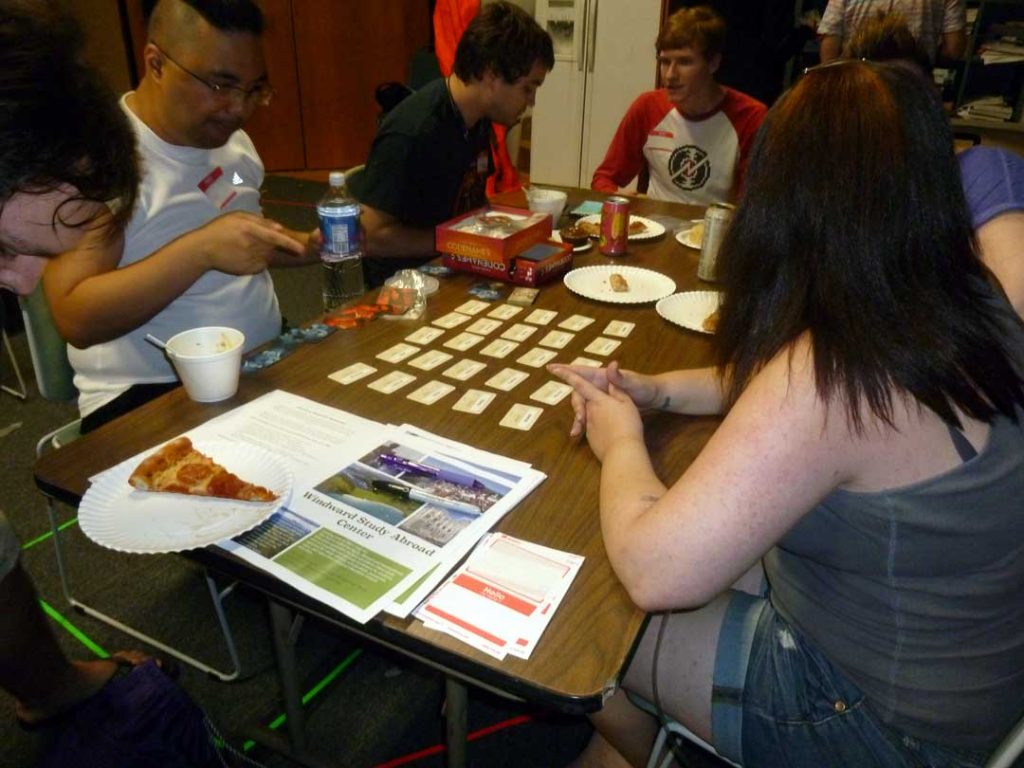 On Aug. 30, the Windward Gaming Group hosted its first event of the semester called the “Convocation Conflagration.” The gathering consisted of board and card games as well as free pizza for those who attended and was meant to promote the club to students at WCC who may be interested in joining. But what exactly is the Windward Gaming Group, and what was the event all about?

“‘Convocation’ means a gathering of people and ‘conflagration’ just means a really big fire,” said Nicolas Logue, WCC theatre instructor and faculty adviser for the club. “It was just a fun idea some of the students who are members thought of for the event”

The event, which was located in Pālanakila 224, was full of board and card games. There were a number of tables available for attendees with different types of games on each table such as Cards Against Humanity or Betrayal at the House on the Hill.

Along with the games, there was also a bake sale where members sold baked goods and snacks to raise money for the club. The money raised will be used to purchase new games. The club is also open to donations of old games.

Logue said that the club may soon incorporate video games into the club mix, including those for the new generation systems: XBOX One, Playstation 4 and the Wii U.

The Windward Gaming Group is an Associated Students of the University of Hawai‘i (ASUH) sponsored club where members explore the concept of games and gaming by playing a vast variety of games from classics such as chess to more recent games such as Coup or Pandemic, which are club favorites.

Coup is a bluffing card game where players hold two cards and the main purpose of the game is to cause other players to lose their cards or influence. The point is to bluff and make players think you have cards you don’t really hold.

A way to cause players to lose a card is by calling their bluff. If the player doesn’t have the card, then that player loses it. If, however, a player calls a bluff of another player and he or she does have the card, then the player who originally called the bluff will lose a card of their choosing. Players are allowed only two cards, so there are essentially two chances players have before they are eliminated.

The club was founded by Logue. “I wanted to create a club where students can meet up and hang out casually in a non-classroom environment,” he said. “That’s a big part of college for me. I made some of the best friends I ever had in college, and I wanted to create that opportunity for current students when I got here to WCC.”

The Windward Gaming Group is one of the largest clubs on campus, consisting of approximately 50 members. It has board games all set and ready to be played in its club room. The painting studio, also located in Pālanakila, has recently been made available for club use as well.

If you’re interested in joining the club, you can pay a $5 membership fee or come to the club room and challenge one of the current members to a game of his or her choosing. If you win, you may join for free. For more information, contact Logue at logue@hawaii.edu.