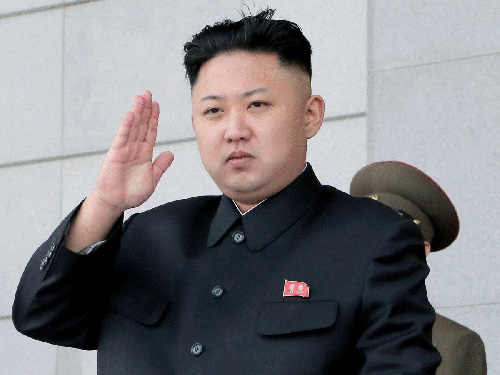 I am not sure what the United States can do about North Korea’s nuclear program. I do know that they are creating nuclear weapons at a rapid pace. I just hope they do not decide to use these weapons on us. If they do, they will be in for a bad time because Trump, without question, will retaliate and North Korea will suffer.

I think we should step up military exercises in the region with our allies and add more patrols to the Sea of Japan. We should also pressure China to stop their assistance of North Korea by adding sanctions until they stop their actions.

I think that the U.S. should continue sanctioning North Korea so they cannot use that money to build more weapons.

When I watched the movie Inside North Korea, I believe that’s the title, it was a bit shocking, actually very shocking. Their leader is a dictator. Ideally, someone like that wants to rule the world (hence the nuclear weapons). Who’s to say we know how advanced he is? He shuts his people out from the outside world. We have no knowledge of what he knows either. If we could get an understanding of what kinds of nuclear weapons he has, we can perhaps make ours more advance. I’m sure that the United States has very good nuclear weapons. We did create the atomic bomb. At this day and age, we must have created something stronger. I am not saying to just start bombing away. In any kind of argument, it is best to be level-headed because it is our people and our home that we are trying to protect.

With the growing concerns of North Korea’s nuclear program, the United States should do more than sanction North Korea. I believe that the U.S. should seek an audience in North Korea and find a diplomatic way to shut down the nuclear program. Worse comes to worse, we should start deploying the military and pressure their leader into shutting down their nuclear program. In the future, to prevent anything like North Korea to happen again, then we should form a coalition of different nations who will consistently pressure those who cause risks to humanity.

From the limited amount of knowledge I have on North Korea, I know that Kim Jong Un is a ruthless dictator. We are talking about a leader who is willing to allow millions of North Koreans starve to death while throwing thousands or more into concentration camps because they couldn’t “get along.” His decisions, which are quite similar to accusations made by Donald Trump, seem to be emotion-based reactions guided by paranoia. The idea that they have the ability to demolish our world is very nerve wracking. So it goes without saying that North Korea’s nuclear program needs to be dealt with very sensitively. I believe that the world leaders should collectively work up a search warrant to find out more information on the ability of their nuclear program. Not to make or take an offensive path to destroy it, but just to be informed on what’s going on. North Korea should be forced to join a world alliance to not use nuclear forces on earth … unless in defense.

I think most people would agree that the situation regarding North Korea has reached critical levels. Unlike most countries, where the threat of mutual assured destruction would deter countries from waging nuclear war, North Korea is either disillusioned or doesn’t care. Any disarming arguments proposed by the U.S. have been shot down and surrendering is not an option. Our only choice is to speak to countries that can be reasoned with. China is one of North Korea’s sole allies and responsible for much of the aid the country receives. The talks surrounding China and N. Korea are not new; President Trump, if he should have his way, wants to force China to stop aid to N. Korea under threat of losing U.S. backing. However, we need China to be an ally in our fight against nuclear annihilation. I think the U.S. should place negotiations with China as a priority, and hope it will be enough to force N. Korea to disarm.