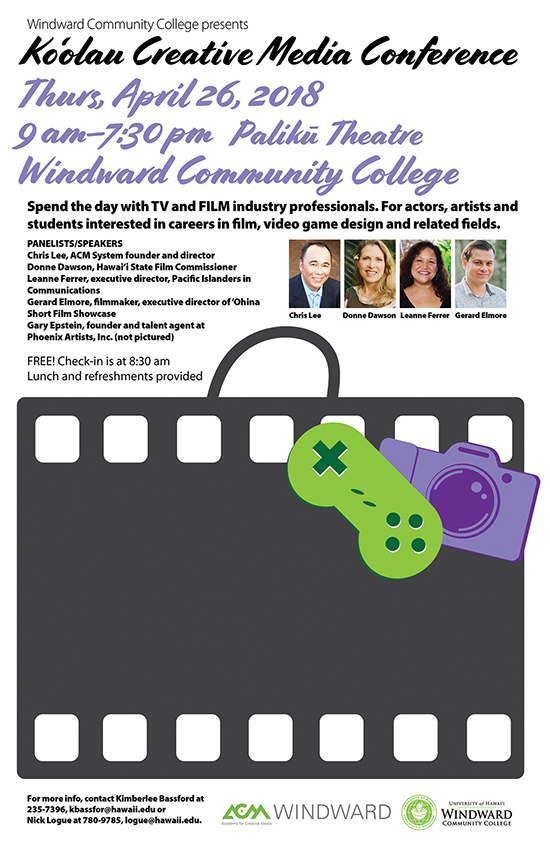 Creative Media at WCC started in fall 2016, and in that short time has had impressive success, having had one of its alumni, Sky Bruno, accepted into a prestigious fellowship at the Sundance Institute. The program’s latest endeavor, however, is closer to home.

On Thursday, April 26, it will host the first-ever Ko’olau Creative Media Conference at Palikū Theatre.

According to organizers, Kimberlee Bassford and Nicolas Logue, the aim of the conference is to bring current and prospective Creative Media students as well as local professionals together for networking and professional development.

“We have people in film, television and game design, those who have worked behind the scenes and in front of the camera, those who are independent mediamakers and those who have made it in Hollywood. We also wanted to highlight some of our own student success stories. The common factor is that everyone believes in the transformative power of creative media,” Bassford said.

The all-day event starts at 9 a.m. and features panels and breakout sessions on  various aspects of filmmaking and video game design. The event culminates with the annual Pueo Literary and Art Journal book launch and student film showcase in the evening.

“I’m looking forward to hearing from all of the speakers,” said Bassford, who also chairs WCC’s Creative Media Committee and teaches several Creative Media and journalism courses. “We took special care in selecting them and in designing the program as we wanted to highlight a variety of experiences and perspectives.”

Logue said that they also wanted students to see how technology is rapidly changing the way stories are told.

“It’s opening up new and interesting avenues for burgeoning storytellers to enter into professional careers as producers of content,” he said. “It’s my wish that WCC is able to provide our students with the training and opportunities they need to engage with these robust industries, such as streaming services, the indie video game design market, opportunities in sound production, documentary filmmaking, creative filmmaking and many other avenues.”

WCC currently offers introductory and intermediate game design courses taught by lecturer Kaleiohu Lee. The college also offers courses in video journalism, film and media studies and screenwriting and plans to expand its offerings over the next few years.

Student Hannah Bailey said she had always struggled with social anxiety and that taking the video journalism course has helped her to feel more confident speaking with people.

“I did my first in-person, on-camera interview with a stranger,” Bailey said. “So if you have social anxiety join video journalism because it will force you to break out of that bubble.”

While Creative Media may be off the radar for many students who just want to graduate from college and land a secure job, Bassford said that the courses teach valuable life skills like communication, collaboration and critical thinking that are relevant in any industry or career. “Creative Media is also about tapping into your own unique energies and talents to communicate, to tell stories, to move people and to make an impact in the world,” she said.

“You are challenged to create something that’s never existed before, and that in itself is empowering, meaningful and just plain fun.”