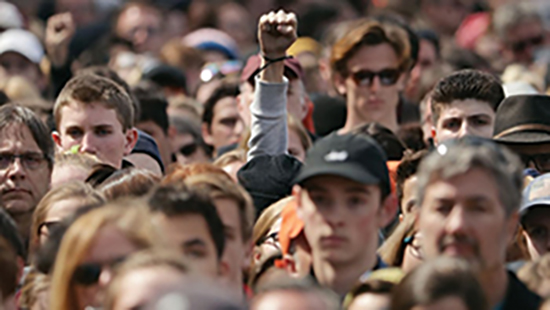 The March for Our Lives movement is a great idea because it shows the government that we will not take it no more and show them that they need to do something about these shootings.

I think the March for Our Lives movement is important for the people across the nation because it shows how the people feel about what happened. It was a tragedy, and I think that it has a major impact on American politics because it brings up the problem about fire arms in the United States. Even though the march was 17 minutes, it has a strong powerful message to honor those that have passed and to show that students across the nation are taking a stance against guns. The political leaders should be thinking about what people want and the betterment of the future instead of money and greed within the political hierarchy.

I went to the march today even though I do not want our gun rights touched at all. I think that many of the people in the march were not actually students, but faculty as well. They will definitely have their voice heard in Washington after seeing the large crowd of people that were there today.

Although I don’t see the march affecting me or the guns I own, it is still good to see people out in the community standing up for what they believe in. Maybe they will make a difference or maybe they won’t but sometimes getting up and being proactive is more valuable than the outcome.

I believe that as American citizens anyone has a right to voice their opinions, but as for the impact on American politics I don’t think that’s enough to change. The NRA supports too many politicians even here in Hawai‘i.

I think the March for Our Lives movement is a waste of time. More students die yearly due to car accidents than mass shootings will ever achieve. The fear of mass school shootings is overly blown out of proportion and is nothing more than a fear campaign. People have a much greater chance of dying in a car crash and that doesn’t stop them from driving.  While sad, the risk is negligible. Instead of guns, how about a campaign against pulling? And what keeps these kids from using any method to kill other students?
– Anthony Cathers

I believe the March for Our Lives movement is a solid way to allow people of a variety of ages (especially ages that cannot vote yet) to voice to our government something has to change to make our schools more safe. Honestly, I would like to hope the federal government could be resilient to changing their ways, but honestly I’m not going to hold my breath. The march was a beautiful way to protest gun violence in the classroom setting but also to reflect the 17 lives lost in Florida.

I’d like to hope the power of the NRA would soon subside and our government can make a logical decision at the federal level, but so far the main point the federal government has been pushing is arming teachers. In which arming teachers would cost more money for training, the firearm itself, and I would hope they would get paid more, but I am not for this. Who’s to say if they were to have a bad day and go shoot up their school. Lastly, in California, a teacher who is also a reserve officer accidentally fired his gun injuring 3 students trying to teach them about safety…clearly not a good option.