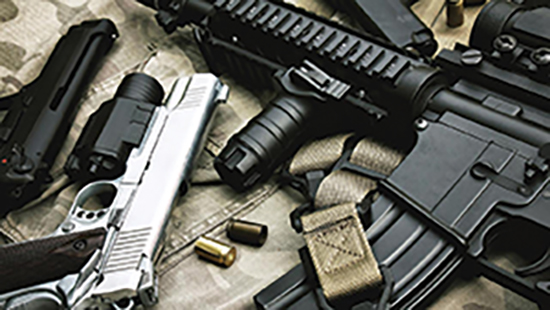 I believe that military-style assault rifles should be banned from private ownership and use because there is no need for them to be used in everyday society, especially automatic weapons. The sad truth is guns have been a part of American society since day one, but we need to stop glamorizing gun ownership. Maybe non-gun owners could get a tax break or something. Guns bring unchangeable problems to our country’s people.

Yes, I think assault rifles should be banned from private ownership. It should be banned because it seems like people have no self-control with these weapons. They are taking advantage of their privileges of having an assault rifle by shooting places and people. They are not only taking one life, but they are taking more than dozens and it is sad. Another thing I question is why do they even need these assault rifles? To hunt? Why? They should set up a place, like a gun range, to practice for hunting. If you want to hunt, you should sign up and rent a gun. Then when you’re done, you return the gun back.

No, because the AR-15 that is used is not an automatic firearm. Obviously there are things that are banned already, but to take away semi-automatic weapons would be terrible. The AR-15 has been around for awhile and so have automatic assault rifles. Only now are they being used to kill. Before, there weren’t as many cases, and I believe it is the way that people are brought up in this world.

I believe that military-style assault rifles should be banned from the public because those guns were ultimately created to kill people in war. Military personnel should be able to own an assault rifle because I think it’s important for the military to have access to these weapons. The major problem isn’t the guns, it’s the people who use them. If gun laws don’t become more prominent within our society, I think that this issue will only worsen with time. Guns should be used for protection and hunting, not to be used to harm others. Hopefully with people making a stance, this issue will be resolved for the betterment of the people.

No, we should not ban AR-15s and other military-style weapons. Number one, because there is a long list of semi-automatic weapons that won’t be touched at all. It is the AR-15’s appearance in a number of American wars that makes it the target of people trying to do away with guns. So even if you ban the AR-15, people will still have access to weapons that can do the same job and do it better. What is going to be solved by getting rid of them? Sometimes people think they can outlaw violence but violence is ingrained in our culture. Taking guns away from law abiding citizens would make them criminals because they are unwilling to give them up. I certainly will not be giving up my guns anytime soon, and I expect that I’m not alone either.

I think the second amendment when it was written was for a different time. Our laws should change with the times. It’s become too easy for anybody to acquire assault rifles, and it might be time to change that.

They should not be banned because people will get them anyways. So we must control the ownership. People need to have very comprehensive lessons to have a proper education of gun ownership. People in this country love guns. Prohibition and alcohol did not work, it just went underground. So the same will happen with gun sales. There is no place to own fully automatic weapons for practical reasons, except for maybe a zombie invasion. Besides education, people must undergo a psychiatric evaluation and go through a waiting period before they are given a gun. Make harsh penalties for unregistered guns. Education and embracing ownership have better outcomes than strict opposition.